Last week’s blog may not have ended on the most thrilling of cliffhangers, but I was conscious that I was well beyond my notional word limit and I had yet to explain three more pictures that I took at a memorial garden in Kelso during our trip to Scotland at half term.  It is not usually necessary to read anything I write in a particular order, but what follows here will probably make more sense if you have read the first part of the story.

The three remaining photographs are more to do with the sense of community that looks to exist among those who live in and around Kelso.  This is only a snapshot, of course, if you will pardon the pun, and it would be foolish to draw too many conclusions from a handful of pictures.  I imagine that the same highs and lows exist in the town as they do anywhere else, so it would be presumptuous to try to label what is going on here as being very different from anywhere else.  However, at least in the quiet corner of the memorial garden, it looks as though something significant may be happening.

Let us start with a full-sized metal sculpture of a horse, which is covered in a blanket of knitted poppies in different shades of purple, topped off with two pigeons – none of the meaning of which seemed immediately obvious or straightforward.  The internet is nothing if not a mixed blessing but, when you are faced with something unusual like this, it turns out to be a godsend, as does Wikipedia.  Yes, I know you have to treat some of the entries with caution, particularly anything that smacks of too much opinion, but if you want some simple facts then it is hard to beat.

For example, it turns out that purple poppies were first introduced in 2006 by the charity Animal Aid in remembrance of animals that have lost their lives in war.  There appears to have been some debate about whether the poppy was the right symbol for this commemoration, with Animal Aid switching to a purple paw symbol in 2015 because they felt the poppy was misrepresenting animals as heroes rather than victims.  Apparently, however, purple poppies continue to be sold by a charity called Murphy’s Army.

While the Royal British Legion does not officially endorse the purple poppy, it has no problem if people want to wear one, issuing a statement saying: ‘We see no conflict in wearing the red poppy next to the purple or white poppy.  Many animal rights supporters also support our work.  We do ask that the items are not offered alongside each other, however, as this would confuse the public.’  I cannot help but wonder about how disappointing it feels that something as relatively simple as a poppy in three different colours would confuse people – no wonder we are so easily manipulated by the unscrupulous.

A question I quite often use if I am setting a quiz is to ask about the recipients of the Dickin Medal, an award set up by Maria Dickin, the founder of the People’s Dispensary for Sick Animals, more often known by its initials – the PDSA.  It was set up in 1917 to help the sick and injured animals of the poor, and today it is the largest veterinary charity in the United Kingdom, carrying out over a million free consultations every year.

The Dickin Medal was devised by its namesake during the Second World War in 1943 as an animal equivalent to the Victoria Cross.  It is a bronze medallion with two inscriptions: ‘For Gallantry’ and ‘We Also Serve’.  Between 1943 and 1949, it was awarded fifty-four times – to a ship’s cat (though it is surely hard to imagine a cat doing anything to help anyone except itself!), eighteen dogs, three horses and, the answer to the next part of the puzzle, thirty-two pigeons.  The award then lapsed until it was renewed in 2000, but it is the pigeons where we must focus our attention.

I regret that I did not take a photograph of it, but there was another artefact in the garden, which told the story of a pigeon called White Vision.  If I ever knew this, I had forgotten it, but aircraft crews in the Second World War routinely took homing pigeons with them on missions over Europe.  In the days before GPS and Sat Nav, an aircraft that was shot down or suffered engine trouble might be able to send a message back to base via a pigeon to aid rescue.  White Vision was just such a bird, and she was part of the National Pigeon Service – I kid you not.

In October 1943, she was aboard a flying boat that was forced to ditch in the North Sea near the Hebrides.  With the plane's radio out of action, the bird was released to indicate where it had gone down, as bad weather conditions were preventing it from being found by other planes.  White Vision flew some sixty miles against a strong headwind for nine hours before arriving back at her pigeon loft in Shetland.  The search was then resumed and the plane was subsequently found, with all eleven members of the crew saved after they had spent eighteen hours in the sea.  White Vision was subsequently the first recipient of the Dickin Medal in December 1943.  Although there was no obvious connection to Kelso itself, I can see why they wanted to tell the story. 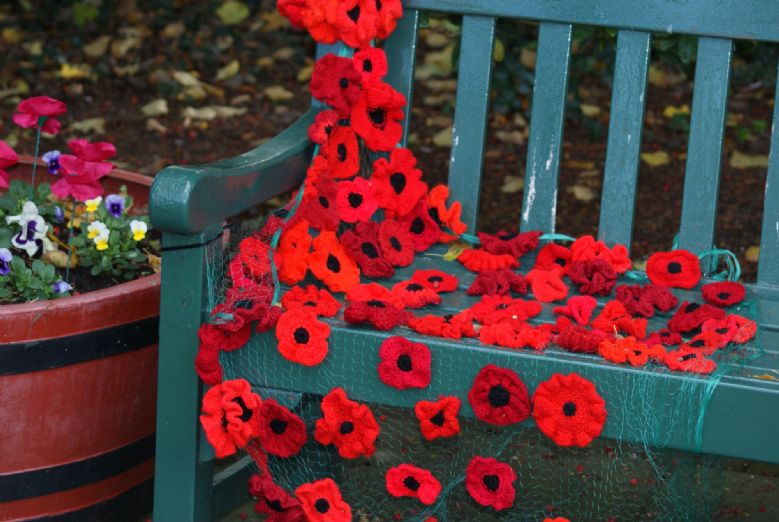 The other two pictures were of a collection of knitted poppies, traditional red ones this time, on a bench in the garden, and a stunning poppy curtain that had been hung down the side of the ruined abbey that stands next door.  It was clear from both that there must have been a tremendous collective effort to bring such a project to fruition, and a quick search online revealed it to be the work of the Kelso Ladies Poppy Group, who look to have developed and enhanced the garden’s display for Remembrance Day each year for the last few years. 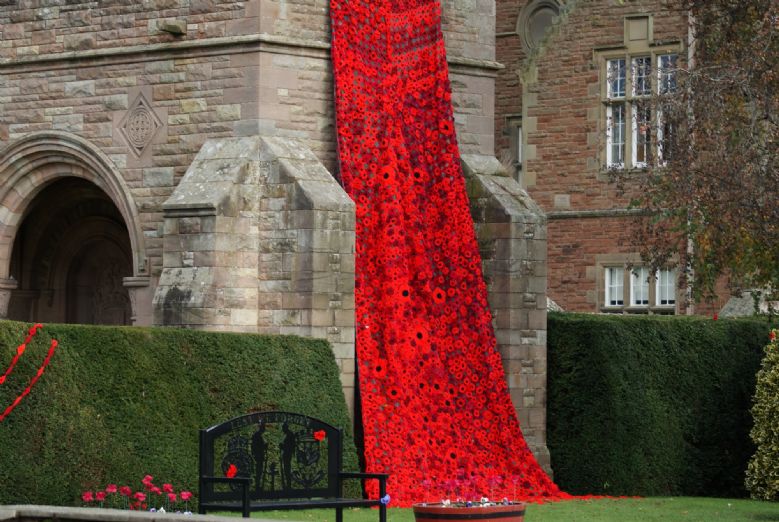 I could try to tell you a bit more about this splendid work, about the help they have received from the Kelso Ex-Laddies and the effort that must clearly go into the annual Civic Week in the town, but time alas has escaped me again.  But what I hope I have shown in the last two weeks is that it is possible to take a simple event such as a visit to a town’s memorial garden and turn it into a sweep of knowledge and understanding that was not there before.

Curiosity may have killed the cat, according to the proverb – though it turns out that this is not the original version anyway, which is a story, no doubt, for another day – but I believe that all of us who work in education have to do more to encourage our pupils to be curious, to try to make links between what they see and what it means.  Three weeks ago, I did not even know Kelso had a war memorial, yet without too much trouble I can now tell the children about why war memorials sometimes say 1914-1919 and not 1914-1918, why Polish forces were in Scotland in 1942, why over three hundred men died at Gallipoli in July 1915, why we see purple poppies and why a bird called White Vision won the first Dickin Medal – all of which seems like a very good investment of my time and energy.