Romano is selected to join the British Diving Team! 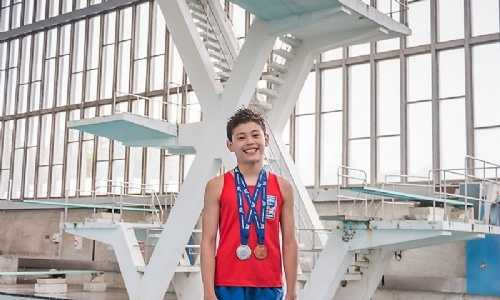 Romano in Year 7 has been talent-spotted by British Diving and who is making exceptional progress in the sport. Last year, he won the National Skills competition with a record score and he has continued to progress at an unusually fast rate under the eye of Lin Chen, an Olympic Gold Medal coach from China.

The normal progression would be for a diver to move from National Skills to National Age Group level.  However, Romano’s progress has been so remarkable that Lin recommended that Romano should be entered in the top tier competition, the British Elite Championships, which were held last weekend in Sheffield.

With a silver and a bronze at the British Elites, Romano has been selected to join the England Team and he will start training for a place in next year’s Junior European Team.

We are delighted to support Romano as he makes such impressive progress in his chosen sport and we are immensely proud of what he has already achieved.  He epitomises our school’s core values of courage, excellence, perseverance and respect, and we look forward to seeing where he can go from here.