An Extraordinary Scottish Garden (Part One) 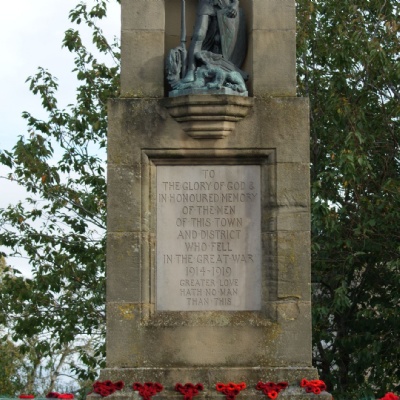 Before I started the formal part of last week’s Remembrance Day assemblies, I showed the pupils a few photographs, which were in effect part of my collection of holiday snaps from half term.  We had decided not to risk having to pay hundreds of pounds in Covid test costs in order to go abroad and, even though the latest of the myriad rule changes would have allowed a trip without too much hassle, we chose to stay in the United Kingdom and treat ourselves to a decent break here.

Our destination was a visit to our daughter in St Andrews, but we stopped on the way to see friends in Manchester for a couple of nights and then we returned to a very nice hotel near Kelso in the Scottish borders where we had first stayed over twenty years ago.  The ability of someone in our family, who is not me, to find a very high quality hotel, and thereby an often eye-wateringly expensive one, might be described as preternatural, but it would clearly be wise for me to say nothing further about this here, so let’s move on.

We had a day at leisure in and around Kelso, so we decided to start in the town centre and take it from there, which turned out to be a serendipitous decision.  We enjoyed the view from Kelso Bridge of Floors Castle, rendered even more dramatic than usual by the fast flow of the River Tweed and River Teviot after a period of heavy rainfall, and it was good to have time to browse in the shops and get some early ideas for Christmas gifts.

We had a notion to visit Kelso Abbey, one of many ruins in the south of Scotland, most of which came about through the destructive urges of either Henry VIII or Oliver Cromwell.  Unfortunately, the abbey itself was closed, apparently over concerns about falling masonry, which you would somehow imagine to be pretty much a permanent challenge when curating a five-hundred-year-old ruin.  However, our initial disappointment was soon alleviated by the discovery of the memorial garden next door, and it was what we found there that formed my assembly presentation.

The aim was to make the point that different communities remember in different ways, depending on local circumstances and individual histories, and the first photograph was of the town’s memorial to those lost in the First World War.  However, as well as simply recounting what we had seen, I wanted to make the point to the children, as I highlighted in this blog in September, about the need for them to be curious rather than judgemental.  For example, the inscription on the war memorial implies that the Great War lasted from 1914-1919, when we are all taught at school that it ended in 1918, on the exact day on which we were gathering – the eleventh day of the eleventh month.

My initial thought was that this might be because British forces were sent to other parts of the world after the war on the Western Front had ended, for example to fight against the Bolsheviks in the Russian Civil War, but a quick search online suggests it is because the Treaty of Versailles was not signed until June 1919.  November 11th marked a ceasefire, but it took seven and a half more months to conclude a peace treaty – albeit one that only lasted twenty years.  In the future, historians may well end up deciding that the period from 1914 to 1945 was actually all part of the same conflict, but that is a debate for another day. 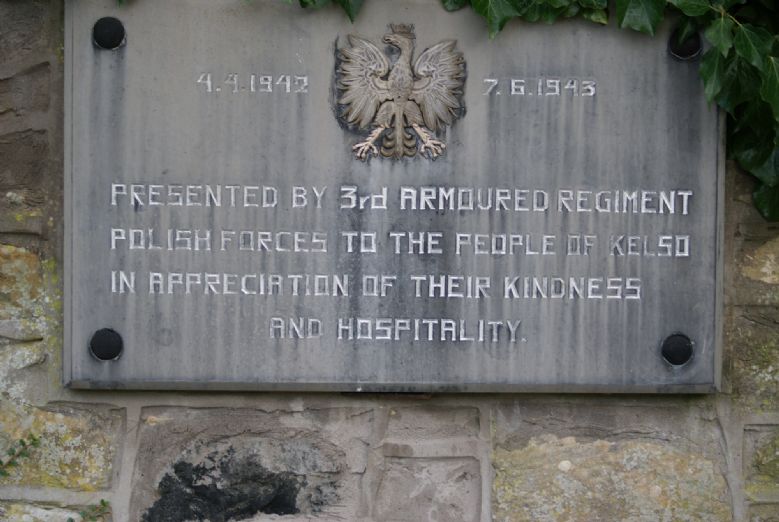 The second picture was a plaque presented to the people of Kelso by the Third Armoured Regiment of Polish Forces in appreciation of their kindness and hospitality.  I asked the pupils what conclusions they thought could be drawn from this, not least the specific dates of 4th April 1942 to 7th June 1943.  I was aware of the contribution of Polish airmen to the Battle of Britain and throughout the Second World War, but I had not appreciated that so many Polish soldiers had been stationed in Scotland, primarily with the task of defending the east coast of the country from any potential German invasion.  Apparently, the plaque was only moved to the memorial garden in 2013, having previously been on both the inside and outside of the town hall. 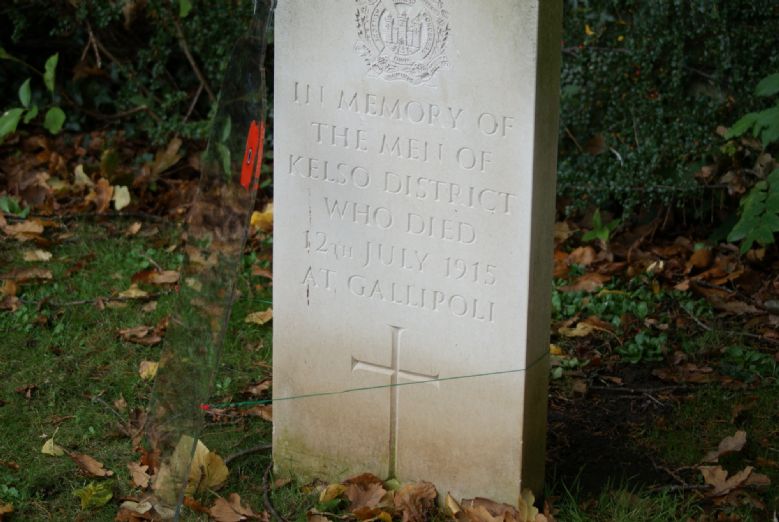 The next picture was a memorial stone of the sort usually seen in a cemetery on the Western Front, with its familiar Portland limestone and engraving.  There is the regimental badge of the King’s Own Scottish Borderers and the inscription commemorates the men of Kelso District who died at Gallipoli on 12th July 1915.  I know about the campaign and its failures, but I tend to associate most of the disasters with the Australian and New Zealand ANZAC forces who bore the brunt of the suffering.  If you have never seen Peter Weir’s 1981 film ‘Gallipoli’, you have missed a classic.  I can never hear Albinoni’s Adagio, which closes the film, without a tear in my eye.

However, it turns out that the town of Kelso also suffered its share of catastrophe, with so many of the hallmarks of heroic failure that marked the various conflicts of the First World War.  Arriving in Turkey in June 1915, just a few weeks later they were ordered to capture three Turkish trenches on the approach to Achi Baba.  Unfortunately, the lie of the land meant that only the first Turkish trench was visible; for the rest the attackers had to rely on information gleaned from prisoners and from air reconnaissance.  The advance was preceded by an artillery bombardment, mainly from the French guns as the British were short of shells, and at 7.35am the soldiers, apparently with a cheer, went over the top.

The Borderers quickly overran the first Turkish trench, and then the second; but as they continued forward, with mounting casualties, they could find no sign of the third trench – because it did not exist. They were out in the open and now coming under fire from their own artillery as well as the Turks, so their commanding officer gave the order to retreat.  Unfortunately, the soldiers had been ordered to attach pieces of shiny tin to their backpacks to help the artillery observers identify their position as they moved forward, which now made them an easy target for the Turkish artillery as they retreated.  In the ensuing confusion, under fire from both sides, they suffered heavy casualties.

Out of 700 men, they lost 331 killed including 12 officers, and 209 wounded, with 13 taken prisoner. There were also heavy casualties in the second wave, not to mention those who would subsequently die from the various horrible diseases that ripped through the exhausted men across the Gallipoli peninsula.  Most of the bodies of those killed on 12th July were never recovered, so they were listed as ‘missing in action’.  It was not until the following June that the War Office announced officially that they must all be ‘presumed dead’.  One simple memorial stone revealed an extraordinary story.

I have been trying to write shorter blogs this term, but with only limited success.  There were six pictures in my presentation, but I have only talked about three so far, so I will finish the story next week.  However, I hope you agree that this seems like a story well worth telling.