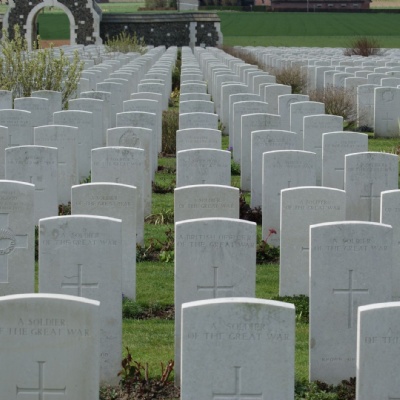 If you want to read a proper trilogy about the First World War, I can wholeheartedly recommend the books of Pat Barker – Regeneration, The Eye in the Door and The Ghost Road – which are very well researched and engagingly written.  A third blog of my reflections on the recent battlefields trip brooks absolutely no comparison as any sort of trilogy, but I thought there was enough of interest to merit a final account of what we saw and how it made me feel.

The focus of Sunday’s tour was Ypres in Belgium, which is a place where I have never felt entirely comfortable.  I am not sure if it is the Flemish language, in which I am embarrassed to say I have never managed to say more than a word or two, or whether it is because my knowledge of the battles in Belgium is considerably less extensive than those in France, but I find I have to concentrate harder with Passchendaele than I do with the Somme – which is not necessarily a bad thing. 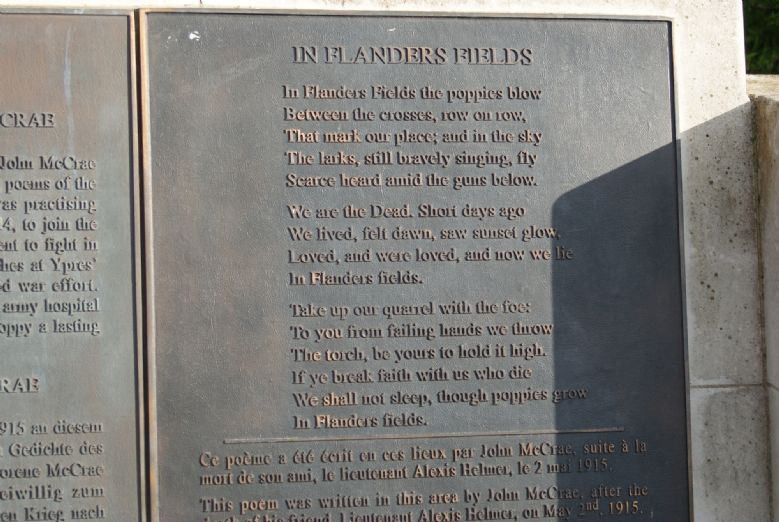 Our first stop was at Essex Farm, where the Canadian doctor John McCrae worked as a medical officer treating the wounded from the Second Battle of Ypres in 1915.  His friend Alexis Helmer was killed in the battle and McCrae presided over his burial alone, noting as he did so the way the red poppies had quickly grown up between the graves on the shattered earth.  The poppy has become arguably the most famous symbol of war, and the poem that McCrae’s subsequently penned the most popular of all the war poems.  Exhausted by his exertions to save others, McCrae succumbed to pneumonia in January 1918 and died shortly afterwards.

In Flanders Fields, the poppies blow
Between the crosses, row on row,
That mark our place; and in the sky
The larks, still bravely singing, fly
Scarce heard amid the guns below.

We are the dead, short days ago
We lived, felt dawn, saw sunset glow,
Loved and were loved, and now we lie
In Flanders fields.

Take up our quarrel with the foe:
To you from failing hands we throw
The torch; be yours to hold it high.
If ye break faith with us who die
We shall not sleep, though poppies grow
In Flanders fields.

My understanding of the Third Battle of Ypres, more usually known as Passchendaele, has been greatly enhanced over the years by some of those rather old-fashioned institutions we call museums.  If you have time on your hands in Ypres itself, aside from the obvious attractions of the first-class chocolatiers and, for those of appropriate age, the excellent selection of Belgian beers, I recommend a trip to the Cloth Hall, the imposing building that dominates the town square.  Originally built in the 1200s, it was destroyed by German artillery during the First World War and meticulously reconstructed between 1933 and 1967.  The museum now housed there is also called ‘In Flanders Fields’, which is a very impressive interactive experience.

However, in order to do it justice, you need several hours, which few school trips can usually accommodate, so our next stop was therefore at the Passchendaele Memorial Museum, housed in the former château of Zonnebeke, which can be visited in about an hour.  There is a very good audio-visual presentation of the various stages of the battle, which helps to explain why it was such an uphill struggle – literally and metaphorically – for the allies to fight their way up the ridge outside Ypres, often in the most appalling conditions on flooded fields.  It is also depressingly honest about how little ground was made – about five miles – for the cost of about half a million lives.

There are lots of artefacts to look at, but the highlight is probably a reconstruction of what life might have been like in an underground dugout.  The mannequins have a certain surreal character to them, and they can be decidedly disconcerting when you come across one unexpectedly, but the noises and the sense of claustrophobia work well, even if the key ingredient of such an experience – the terrifying and exhausting fear – is inevitably lacking.

The last two stops of the tour provide a contrast that epitomises the memorials of the Western Front.  I will start with the last visit of the day, to the allied cemetery at Tyne Cot, the largest Commonwealth military graveyard in the world.  There are nearly twelve thousand soldiers buried there, over eight thousand of whom are unnamed.  There is also a memorial to the missing, which contains nearly thirty-four thousand names, and which was needed because the authorities realised that they could not fit all the names of the missing onto the Menin Gate in Ypres.

If you stand at the top of the cemetery on a clear day, as it was when we were there, you can see the spires of Ypres below you in the distance, which helps to understand why this higher ground was so important to the Germans and so damaging to those trying to take it.  Above all, however, it is the sheer scale of the place that has the most impact, with row upon row of graves stretching almost as far as the eye can see.  It was unnervingly quiet when we were there, which only seemed to add to the sense of something powerful and important.

More than forty-four thousand soldiers are buried at the German cemetery at Langemark, nearly four times as many as at Tyne Cot, but in an area probably no more than a quarter of the size.  The grass is not mown as closely, there are no flowers and the dark granite stones to mark the fallen lie flat.  Oak trees planted across the cemetery provide a looming, ominous presence, regardless of the time of year, and the sculpture of four mourning figures standing guard over the dead adds to a sense of eeriness that is hard to shift.  The none-too-subtle implication is that the deaths of German soldiers were not as important as those of the British.

When I first visited the battlefields thirty years ago, I returned full of enthusiasm, if that is the right word, for what I had seen and how important I thought it all was.  It may be events in Ukraine, it may be the pandemic, or it may just be that I am getting older, but the visits to Langemark and Tyne Cot, one straight after the other, left me feeling uneasy in a way that I have not before.

It is often said that it is the victors who get to write the history, which is not really a claim that stands up to close scrutiny, but there seems little doubt that it was the British and Commonwealth governments who controlled the narrative of memorial on the Western Front.  It is absolutely right that we should remember the dead, but I am sure we should do more to highlight the sacrifices on both sides and to acknowledge that remembrance for victors and vanquished, as well as the need for reconciliation for both sides, is of greater merit than the current structures suggest.

The philosopher George Santayana wrote that those who cannot remember the past are condemned to repeat it.  In a few hundred years from now, I have an idea that historians will look at the first half of the twentieth century and decide that the two world wars as we know them were really part of the same conflict, with Hitler in particular in no mood to learn the lessons from history and seeking to settle scores from the earlier conflict regardless of the consequences.  Putin is no historian either, which crossed my mind on several occasions on that cold and blustery weekend.