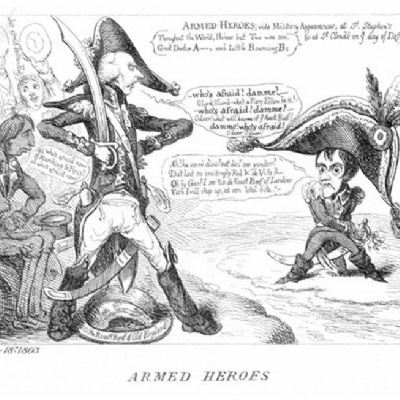 The Duke of Wellington allegedly said that the Battle of Waterloo was won on the playing fields of Eton.  In fact, the concept of organised sports did not become a reality until decades after the defeat of Napoleon and there were no playing fields, as we would recognise them, in 1815.  You may also believe that Wellington was tall and Bonaparte was short, but there were actually just a couple of inches between them.  We tend to think of a tall man lording it over a shorter one because we have seen the cartoons of the time, which used ‘alternative facts’ to perpetuate the stereotype.

You may be less familiar with the idea that in public Wellington was the picture of modest masculinity and self-effacement, but in reality he had something of a vindictive streak.  A BBC History Magazine article recently highlighted how, after Waterloo, a naked three-metre high statue of Napoleon depicting him as Mars, the ancient Roman god of war, was sold to the British government, who presented it to Wellington.

He installed it at the base of the stairway of his London home, Apsley House, and he continued to collect trophies of his erstwhile foe: he seduced two of Napoleon’s former mistresses; bought the emperor’s sister’s mansion in Paris; and amassed an extensive collection of Napoleonic memorabilia including weaponry, books, busts, paintings and even the vast Sèvres Egyptian dinner service refused by Josephine as a divorce present.  At Apsley, Mars the Peacemaker was used as the ultimate display of personal triumph over the naked emperor, a self-made god forever on undignified display.

A hundred years later J. F. Roxburgh, the first headmaster of Stowe School, said that the ideal pupil will be useful at a dance and indispensable in a shipwreck, which is not always a key curriculum aim or pastoral philosophy in many schools.  This is a shame, because the course of our history might have turned out differently if we had focused more on the foxtrot and life-saving, and less on the promotion of an unjustified sense of supremacy based on the colour of our skin or the allegedly positive character traits of a stiff upper lip in the face of adversity.

Opinions about the British Empire are increasingly aligning to the negative rather than the positive, focusing on theft, coercion and oppression rather than celebrating the mentality of ‘Rule, Britannia’ or ‘Land of Hope and Glory’.  The recently deceased Archbishop Desmond Tutu summed it up nicely when he said, ‘When the missionaries came to Africa, they had the Bible and we had the land.  They said: “Let us pray” and we closed our eyes.  When we opened them, we had the Bible and they had the land.’

The splendidly-named Ellwood Cubberley wrote in the National Education Guide in 1916, ‘Our schools are, in a sense, factories, in which the raw materials (children) are to be shaped and fashioned into products to meet the various demands of life.’  Two years into the First World War, no doubt he was thinking about the demands of the Western Front.  There is also a reasonable argument, going back to the Education Act of 1870, that schools were seen as the means to guide citizens to vote ‘wisely’ and to prepare young men to run the factories, drive the trade and master the Empire.

Driven by the efforts of Edward Thring, headmaster of Uppingham School, the public school system began to develop with the foundation of the Headmasters’ Conference in 1869.  Therefore, by approximately halfway through the Victorian era, the mix of imperial superiority, class prejudice and unjustified arrogance was well on the way to creating a misguided sense of assumed superiority that has arguably led our country to the paddleless creek where many think it currently finds itself.

There is a different and better way of doing things, and it is never too late to change our course, even if it requires a rejection of much that people think marks us out as British.  We need to admit that our education system is largely broken and not fit for purpose – just watch the late Sir Ken Robinson’s Ted Talks.  We need to accept that a win-at-all costs mentality has only brought defeat, that the days of the pointy-elbowed go-getter are numbered and that a stiff upper lip is as useful as a chocolate fireguard when faced with the need to adapt rather than to perpetuate an often dangerously misguided sense of national superiority.

The future needs to be based on genuine values and humility.  These are not something bland in a corporate mission statement, but a real commitment to making the world a better place, based on co-operation, respect and, for a change, the truth.  It will not be easy, but it would not be interesting if it were easy.  The harder option is usually the right option, and our priority as educationalists has to be to do the right thing.

We know we must act to save the planet, and we must also act to create a better life for everyone on the saved planet.  Now is the moment to do it.  As Victor Hugo wrote, ‘There is nothing more powerful than an idea whose time has come.’