Paradise by the Dashboard Light 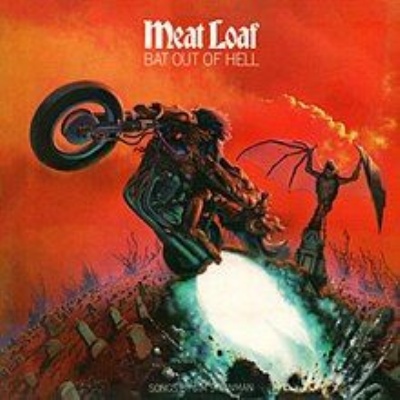 The death of Michael Lee Aday last week had a strange effect on me, so I thought it might be a useful self-help tool to use this week’s blog to try to articulate my thoughts about why this might have been.  If you logged in to read my reflections on the lengthy tome that was Cromwell’s biography, you will have to wait a bit longer, I’m afraid.  When Prime Minister Harold Macmillan was asked what he thought was the greatest challenge for a statesman, he famously replied, 'Events, dear boy, events', and the demise of Meat Loaf – for it is he - turns out to constitute an event in my world, for reasons I hope to explain.

I remember my parents being upset when Elvis Presley died, but my juvenile mind tended to focus more on the fact that he died on the toilet eating hamburgers, or something like that, so it was not a milestone for me.  Three years later, John Lennon was gunned down on 8th December 1980, a moment that has stayed with me more tangibly.  This is not because I especially liked his music, but because it was my younger brother’s fifth birthday.

A DJ called Roger Scott was on Capital Radio every evening back then, usually counting down the top ten songs compiled daily from listeners’ phone calls.  I seem to recall that Lennon’s current single, ‘Starting Over’, which had been moving down the chart, was immediately reinstated as the number one song requested that week, probably because it took a while to agree that ‘Imagine’ was going to be the definitive record by which his later career would be remembered.  Scott himself died of cancer in 1989 just a few days after his 46th birthday, which felt at the time that another high-profile life had ended too soon.

I could easily be misremembering this, but I think there had been talk that The Beatles might set aside their differences in 1980 and get back together for another tour.  This was not particularly significant for me because I was never the greatest fan of their output, particularly not some of the later stuff.  I know that Sergeant Pepper is judged to be one of the great albums (‘Dad, what’s an album?’!), but it never really did it for me.  Far and away my favourite Beatles’ song is ‘Eleanor Rigby’, with its desperate sadness about so many people’s meaningless existences – ‘All the lonely people, where do they all belong?’  But much of the rest of it I can take or leave.

When Graham Chapman died in 1989, it meant there could be no more Monty Python reunions.  Some of their later work may have jumped the shark, as the saying goes for a show that has passed its sell-by date, but there was always the hope until that moment that another Holy Grail or Life of Brian might be possible.  Chapman’s death, however, did allow John Cleese to deliver one of the great funeral eulogies, which still makes me laugh and cry today.  It is easily found online, but please do not play it in front of younger children because, as you might expect, it is a bit rude in places.

I was recently asked if I had a favourite band and/or favourite album, and it was not difficult to find an answer – Meat Loaf and ‘Bat Out of Hell’.  Although it was first released in 1977, the same year Elvis died, I did not discover it until three or four years later.  Again, it is funny how we remember some things vividly, or at least we think we do, and yet so much is never recalled.  I have a strong memory that we were on a school coach taking us to an away fixture, though I am not sure exactly how old we were.

There was a boy called Ayad, who had told us he was from Lebanon though it subsequently turned out he was from Iraq, for reasons that were way beyond our limited understanding back then.  Anyway, he had discovered ‘Bat Out of Hell’ and he chose this coach journey to tell us all about it.  He had learned the lyrics to the title track and had written them all down.  He then proceeded to try to sing them to us, but I do not think he got very far because we were not very good at embracing new experiences back then.

Some time later, I bought my own copy of the album, and it has never since been far away.  If it was 1980 when I discovered the genius of Jim Steinman’s lyrics, then I am into my fifth decade of savouring such talent.  It was always my record of choice when I had been to the pub and was not yet ready for bed.  I too learned all the lyrics and I can still recall them all today, even if there are longer and longer gaps between hearing them.

It is, of course, irrational to see Meat Loaf’s death as somehow era-defining.  At 74, he was hardly likely to record anything new.  If I am honest, while I enjoyed some of what followed ‘Bat Out of Hell’, it was only the occasional song that reached the same peak as far as I am concerned.  It is always clever lyrics that I enjoy most, not guitar or keyboard skills.  I have no musical talent at all, so it is the poetry of good songwriting that I respect the most.

Meat Loaf’s songs were always too long to make it as singles, but that does not matter.  In some of the obituaries last week, the writers talked of Wagnerian rock, layered with hidden depths.  BBC 4 re-ran a documentary about his life that marked his passing appropriately and showed some footage from shows he played with an orchestral backing, which I later ended up watching on YouTube until well past my usual bedtime.  As I said, this death had a strange effect on me and I think I was trying to hang on to something, but I am not sure what.

If they ever need to scrape the bottom of the barrel and invite me to do ‘Desert Island Discs’, I have my eight songs ready.  I would be tempted to take ‘Bat Out of Hell’ as my luxury item because I do not think I would ever tire of it, but something more practical might be more useful.  Either way, ‘Paradise by the Dashboard Light’ would be one of my eight records.  I have always been entranced by its story-telling of teenage romance, the way it uses the baseball commentary to describe ‘getting to third base’ and the way it ends: ‘I swore I’d love you till the end of time… So now I’m praying for the end of time to hurry up and arrive…’

In the words of Stephen Fry from a Tweet last week, ‘Thank you, Meat Loaf, for all the pleasure you brought us.  I hope paradise is as you remember it from the dashboard light.’