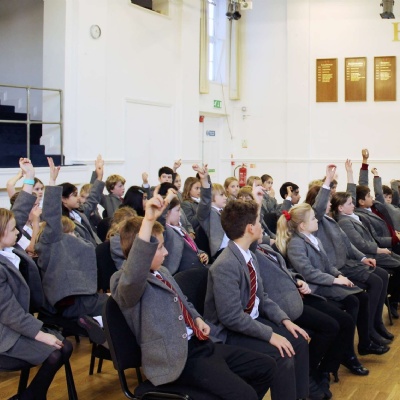 I can’t remember where I got it from, but I have a note in one of my ‘blue sky’ files that recommends delivering the same assemblies to all the different age groups in the school. I think it may have come from a primary school head who was making the point that a younger audience is perfectly capable of benefiting from ideas that might initially have been designed for older children. I didn’t really do much by way of response for a long time, but over time I came to appreciate the wisdom in this advice.

At Radnor, every other week we have an assembly for Year 10, Year 11, Lower Sixth and Upper Sixth on Monday, one for Year 7, Year 8 and Year 9 on Wednesday and one for Year 5 and Year 6 on Friday. I have already got into the habit of using the same ideas each time, not just because it is easier for me but also because I believe it is a positive way to bind the school community together.

This week I shared three of my favourite poems with the children. The first is from my younger years when the books of A.A. Milne were the mainstay of my reading programme. ‘When We Were Very Young’ and ‘Now We Are Six’ each contain a timeless collection of poems, many of which have become an integral part of many people’s childhood. ‘The King’s Breakfast’ has always made me smile, with the frustrations of the monarch, and his simple wish for someone just to do as he asks without making everything overcomplicated, proving to be a situation I have been able to relate to all through my adult life, not least when I’m at work!

The King’s Breakfast - by A. A. Milne

The Dairymaid
She curtsied,
And went and told
The Alderney:
"Don't forget the butter for
The Royal slice of bread."

The Alderney said sleepily:
"You'd better tell
His Majesty
That many people nowadays
Like marmalade
Instead."

The Dairymaid
Said "Fancy!"
And went to
Her Majesty.
She curtsied to the Queen, and
She turned a little red:
"Excuse me,
Your Majesty,
For taking of
The liberty,
But marmalade is tasty, if
It's very
Thickly
Spread."

The Queen said
"Oh!"
And went to his Majesty:
"Talking of the butter for
The Royal slice of bread,
Many people
Think that
Marmalade
Is nicer.
Would you like to try a little
Marmalade
Instead?"

The King said,
"Bother!"
And then he said,
"Oh, deary me!"
The King sobbed, "Oh, deary me!"
And went back to bed.
"Nobody,"
He whimpered,
"Could call me
A fussy man;
I only want
A little bit
Of butter for
My bread!"

‘The Mower’ by Philip Larkin was sent to me by a colleague after the death of a friend of mine a few years ago. I have treasured it ever since, particularly its exhortation to be kind to one another while there is still time to do so. Analysts of Larkin rate it as one of the last great poems he wrote, a view with which I would not disagree.

The Mower - by Philip Larkin

The mower stalled, twice; kneeling, I found
A hedgehog jammed up against the blades,
Killed. It had been in the long grass.

I had seen it before, and even fed it, once.
Now I had mauled its unobtrusive world
Unmendably. Burial was no help:

Next morning I got up and it did not.
The first day after a death, the new absence
Is always the same; we should be careful

Of each other, we should be kind
While there is still time.

Finally, I read the children ‘If’ by Rudyard Kipling, voted not long ago as the nation’s favourite poem. Although it could be argued that it is beginning to look a bit dated now, it seems hard to disagree with the ideas expressed by Kipling about the need to deal with the ups and downs of life as stoically as possible. ‘If you can meet with Triumph and Disaster and treat those two impostors just the same’ are the words above the players’ entrance at the All-England Tennis Club in Wimbledon. Much more poignantly, given the last line, Kipling’s only son John never had the chance to be a man because he was killed at the Battle of Loos in 1915, just six weeks after his eighteenth birthday.

If - by Rudyard Kipling

If you can keep your head when all about you
Are losing theirs and blaming it on you,
If you can trust yourself when all men doubt you,
But make allowance for their doubting too;
If you can wait and not be tired by waiting,
Or being lied about, don’t deal in lies,
Or being hated, don’t give way to hating,
And yet don’t look too good, nor talk too wise:

If you can dream—and not make dreams your master;
If you can think—and not make thoughts your aim;
If you can meet with Triumph and Disaster
And treat those two impostors just the same;
If you can bear to hear the truth you’ve spoken
Twisted by knaves to make a trap for fools,
Or watch the things you gave your life to broken,
And stoop and build ’em up with worn-out tools:

If you can make one heap of all your winnings
And risk it on one turn of pitch-and-toss,
And lose, and start again at your beginnings
And never breathe a word about your loss;
If you can force your heart and nerve and sinew
To serve your turn long after they are gone,
And so hold on when there is nothing in you
Except the Will which says to them: ‘Hold on!’

If you can talk with crowds and keep your virtue,
Or walk with Kings—nor lose the common touch,
If neither foes nor loving friends can hurt you,
If all men count with you, but none too much;
If you can fill the unforgiving minute
With sixty seconds’ worth of distance run,
Yours is the Earth and everything that’s in it,
And—which is more—you’ll be a Man, my son!

Although there was clearly a lot to think about, the message was very much intended to be positive and upbeat, with the overall conclusion that the pen remains far mightier than the sword, the power of words is undiminished and poetry is an ideal medium to lift our spirits, inspire us and motivate us for the challenges ahead.