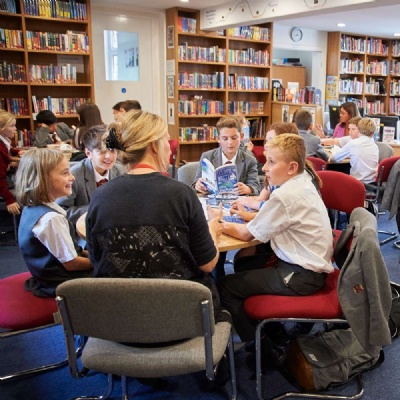 The more complicated the world seems to become – even if in reality it is no worse today than it has been for hundreds of years – the simpler I find myself trying to make things. For example, I think I have made genuine progress with my educational philosophy in recent months, reducing all the competing theory and ideas down to the five-word maxim of ‘work hard and be kind’.

Another breakthrough comes with an examination of what makes children, and then adults, more effective, in whichever way we choose to define that word.  In a nutshell, if parents can encourage their children to read for pleasure, the chances are that the child will make better progress, both at school and in life more generally.

It doesn’t always work, of course, and my own story might serve as a reasonable example.  I hardly read at all when I was younger, preferring to sit for hours in front of the television.  This possibly meant I was an auditory learner, or maybe it meant that I liked watching television.  Even now, if I go to a museum, I learn much more from watching the audio-visuals than I do from reading the information.

Despite a pitifully narrow reading experience, I picked up enough knowledge and understanding at school to secure a decent set of A Levels and go to a university that would never accept me nowadays.  Even then I worked out I was good at being an information magpie, picking up bits of other people’s wisdom and rearranging it into a relatively coherent order in response to a question.  It did not always work, but it was the start of a process that has stood me in good stead over the years.

While I was shinning up the greasy pole of the teaching profession – as some wag put it, ‘Head teachers are like baboons: the higher they climb, the more they display their less attractive features’ – my focus tended to be on structures and systems rather than any sort of bigger picture.  It is probably therefore no coincidence that it was only when I became a head for the first time in 2008 that I began to appreciate the importance of looking more to the horizon rather than the edge of whichever rut I was in at the time.

It was only then that I came to appreciate the genuine power of reading for pleasure.  Whenever someone at a conference or at a talk in school recommends a book, I always note it down and try to find time to read it.  Sometimes, it is a fruitless and unproductive exercise, but more often each book reveals enough hidden gems to make it interesting enough to share with colleagues, pupils or anyone else who might want to learn more.

In the coming weeks, I will endeavour to pass on some of the wisdom I picked up over the summer, from the imperative need to address the existential threat of climate change to the rather more obscure observation that it is almost impossible to lasso a zebra because they can watch the rope and duck out at the last minute.  More zookeepers are injured each year by zebras than tigers, apparently, mainly because when zebras bite they do not let go.  Who knew?

From invisible gorillas in psychological tests to the challenges we will face in a world where living to be one hundred years old will soon become the norm, via the need to educate children more roundly rather than to obsess with short-term knowledge to pass exams – what Bill Lucas and Guy Claxton identify as the 7Cs: confidence, curiosity, collaboration, communication, creativity, commitment and craftsmanship – I have learned a lot.  However, there is still so far to go.  As Socrates so eloquently put it: ‘I am the wisest man alive, for I know one thing, and that is that I know nothing.’