Who Chooses the Canon? 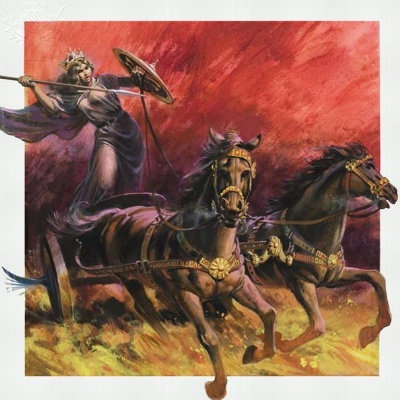 The word ‘canon’ in this week’s title is not a misprint for ‘cannon’, thereby creating a question about who is selecting which late-medieval siege weapon to destroy the castle, nor does it refer to the Japanese multinational company that specialises in optical, imaging and industrial products such as lenses, cameras, medical equipment, scanners, printers and semiconductor manufacturing – thank you once again, Wikipedia, for the reference.

Instead, ‘canon’ here refers to what was originally a collection or list of sacred books accepted as genuine, and which nowadays tends to mean the ‘must read’ books for a university course or the ‘must have’ records in a classical music collection.  Building on what I wrote last week about E. D. Hirsch and his quest to maintain cultural literacy from one generation to the next, my point is to ask who gets to choose what someone else needs to know.

For example, if we think that knowing something about football might be useful – and I fully appreciate there will be plenty of people who would say that such knowledge is completely pointless – are we going to nominate Bobby Charlton for our list, or should we choose Geoff Hurst, Pele, Gary Lineker, Diego Maradona, David Beckham or Kevin De Bruyne?  Are we looking at English players, British ones or those on the world stage?  Given that football is one of the most meritocratic activities on the planet, whereby anyone from whatever background can rise through their own skill – and a huge amount of good fortune – to be a global superstar, where on Earth do we start and finish?

Hirsch said that a human group must have effective communications to function effectively, and effective communications require shared culture, and shared culture requires transmission of specific information to children.  Literacy, an essential aim of education in the modern world, is not an autonomous, empty skill but instead it depends upon literate culture.  Only by accumulating shared symbols, and the shared information that the symbols represent, can we learn to communicate effectively with one another in our national community.  However, the problem is that each of these national communities is different.  For example, if we talk about football in America, not only do we need to reference different people, we need to reference a completely different sport.

He went on to say that the chief function of literacy is to make us masters of this standard instrument of knowledge and communication, thereby enabling us to give and receive complex information orally and in writing over time and space, arguing that advancing technology, with its constant need for fast and complex communications, has made literacy ever more essential to commerce and domestic life.  He concludes that the literate language is more, not less, central in our society now than it was in the days before television and the silicon chip.  But he wrote this before the internet became what it is today, before we all had smartphones and before the fragmentation and silo mentality that so many people seem to have developed.

Is there anything therefore that we can actually agree on?  If not sport, then can we come together to find a shared version of the history of our land?  Those of us who have grown up in the UK know the stories, from Alfred burning the cakes to Harold getting an arrow in the eye, via Drake playing bowls before defeating the Armada and Churchill praising ‘the Few’ for their efforts in the Battle of Britain.  This must surely be a shared culture, and one where we can find unity and harmony in our island story.

Except, of course, we can’t do this, because most of what we think we know turns out not to be true, as I have just had confirmed by reading a cracker of a book called ‘Great Tales from English History’ by Robert Lacey.  If you want a potted guide to everything that did – and did not – happen in our past, I cannot recommend his work more highly.  I rattled through the book in just a few days, which is not usually easy for me during term time, but I just kept going back to it because I was enjoying it so much.

Lacey sets the scene from the outset, when he makes the point that there may well be such a thing as pure, true history – what actually, really, definitely happened in the past – but it is unknowable and we can only hope to get somewhere close.  The history that we have to make do with is the story that historians choose to tell us, pieced together and filtered through every handler’s value system.

He goes on to point out that the lessons we derive from history inevitably resonate with our own code of values.  When we go back to the past in search of heroes and heroines, we are looking for personalities to inspire and comfort us, to confirm our view of how things should be.  That is why every generation needs to rewrite its history, and, if you are a cynic, he says that you may conclude that a nation’s history is simply its own deluded and self-serving view of its past.

The story is told of how Sir Walter Raleigh is said to have given up writing his ‘History of the World’ when he looked out of his cell in the Tower of London one day and saw two men arguing in the courtyard.  Try as he might, he could not work out what they were quarrelling about.  He could not hear them, he could only see their angry gestures.  So there and then, Lacey tells us, Raleigh abandoned his ambitious historical enterprise, concluding with acute perception that you can never establish the full truth about anything.

However, despite this rather gloomy start, we quickly to return to the optimism of the tales the author is about to recount.  He accepts that the things we do not know about history far outnumber those that we do, but nevertheless he sees the fragments that remain as precious and bright, offering us glimpses of drama, humour, incompetence, bravery, apathy, sorrow and lust – so basically the stuff of life – and he revels in the fact that there are still a few good tales to tell.

It may take two or three weeks to share all these ripping yarns with you, but to whet the appetite let us go back to Roman times and to one of the first British female role models, Queen Boadicea, as I used to call her when I was at school, or Queen Boudicca as she is more often called today, the warrior who defied the might of Ancient Rome and who died heroically in the struggle.  What images come to mind when you hear the name, I wonder?  A chariot with curved swords on the wheels to cut down the enemy as she passed?  That is what I thought as well, but alas this is not true – just the invention of a later time.  Remains of the Britons’ light bent-wood chariots from the time show no scythes on the wheels.

Nor is there evidence of another great myth, that Boadicea fought her last battle near London and that her body lies where she fell – in the ground on which King’s Cross Station was built many years later.  Her supposed grave beneath platform ten is apparently the reason why Harry Potter’s Hogwarts Express leaves from platform nine and three quarters.  In fact, as Lacey gleefully concludes, the bones of the great queen probably do lie near a railway line – albeit more than a hundred miles north of King’s Cross, near the village of Mancetter in modern Warwickshire, where the trains on the Euston line between London and the north-west rumble through the battlefield where, historians calculate, Boadicea fought her last battle.  We may argue about the site of her burial, but we can at least be sure that no cannons were involved in her death.